Large-scale alterations to freshwater inflows to the Bay began in the early 1940s and continue through today. Water is captured and stored upstream and diverted for urban and agricultural use. These changes to the amounts and timing of inflows affect ecological processes that create and maintain estuarine habitats. For example, these changes to Bay inflow affect the quality and quantity of low-salinity habitats in the Estuary, the movement of sediment through the system, and the productivity of food webs. 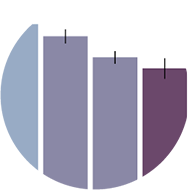